I recently visited Israel on a special seminar with other early childhood Jewish educators from the Boston area, which was organized by Rachel Raz and Linna Ettinger at Hebrew College.  We toured many areas of the country and visited schools in Jerusalem and Haifa.  I was very impressed with the priority that Israel puts on early childhood education.  Just as we emphasize a child-centered philosophy, so do the places we visited on our tour.

One of the places we went that brought this out in surprising ways, was the Hadassah Hospital in Ein Kerem, where the Chagall windows are displayed, depicting the story of the twelve tribes in famously vibrant colors.  It was in this setting that we got to see how children are taken care of in the hospital, helping their light to shine like the light through Chagall’s windows. 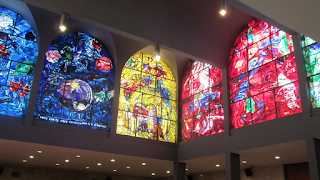 The window that I got to peek in was very uplifting.  Our tour guide D’vir, who had experienced trauma in an attack, was helped as a child at Hadassah.  When he found out we were early childhood educators, he wanted to show us a part of the hospital that the average tourist does not get to see.   D’vir got clearance to take us right into the rooms where the very young children are with their parents.  This was actually a hospital schoolroom that they have staffed with teachers.  Through this program they have learned that recovery times were much shorter when children kept up with their schoolwork. The children were supported by a staff playing games and helping them through their time in the hospital.  There were even clowns walking around in lab coats and shiny red noses.

Another example of the value placed on early education in Israeli society, was found in Haifa’s art programs.  Municipality money was spent so that all schools could come to an art center run by an art specialist, focused on children’s art.  The center exposed visitors to different experiential art perspectives and techniques.  We certainly do a lot at Alef-Bet with art, but wouldn’t it be great to have an art specialist doing activities in Hebrew? 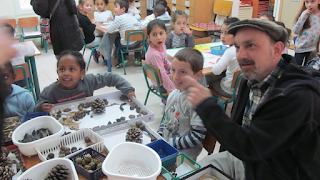 One can see a similar spirit when a Nobel laureate, Professor Dan Schechtman was asked, “Help us improve science in the preschool in Haifa,” his response was - to focus on science in early childhood education.  I stayed with the head of a STEM (science, technology, engineering, math) based Gan (kindergarten) whose school was the result of the advice of the Nobel laureate.  It was amazing to see that a school was able to be created so quickly to teach science: each of the three play areas on the schools grounds had a different science based focus, including physics, water and sand.

Our tour went to an outdoor farm center where children are brought to learn about agriculture and the biblical link to the land.  We planted almond trees.  It reminded me of how our planting with children helps them connect with nature and the food they eat. 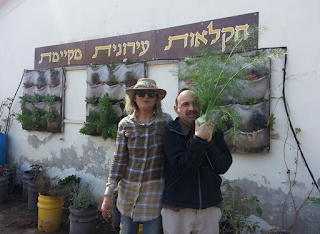 Seeing other early childhood programs, reconnecting with Israel and sharing the experience with such dedicated colleagues was inspiring and motivating, renewing my appreciation for the importance of the work we do.  I look forward to continuing the Boston-Haifa connections that were made and to sharing our program with our Haifa counterparts when they come to Boston. 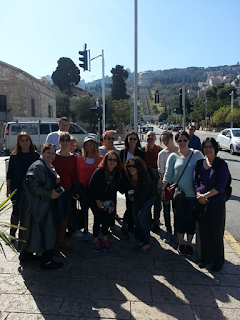 “If You Will It, It is No Dream”
(Theodor Herzl)

Shalom and welcome to the “Israel Educational Journey” blog. On February 14, 2017 a group of educators and professionals will travel together to Israel. We will explore the old and the new, nature, educational settings, innovations, the complexity and diversity of the Israeli society and much more. We will spend time with our partners in the city of Haifa, stay at their homes, and visit their educational centers. We will travel, explore, learn, hike, swim, float, teach, sing, ask questions, make new friends, exchange ideas and grow.

Some thoughts behind the itinerary: At a time of uncertainty in our world, it is important to get inspired and go through an uplifting experience that will recharge us and inspire us to be part of the change our world needs. This experience is designed to enhance each participant’s life on the personal and professional levels, and empower them to bring this experience back to their communities.  Israel is the best place for inspiration since it was built from dreams, visions, uncertainty and the hard work of many individuals.  It is still today, despite the complexity of the geographical region and geopolitics, thriving and leading in many fields. This journey is designed to explore some of the innovative ideas and dreams that led to the establishment of the State of Israel in 1948, and the ongoing innovations that are taking place today in many fields such as science, education and human rights.

We will explore the vision of Theodor Herzl, born Benjamin Ze'ev Herzl and known as the visionary of the state, who said,

We will look at how his vision impacted the establishment of the State of Israel and how this same vision is so relevant for each one of us today. We will witness how the vision of David Ben Gurion, Israel’s first prime minister, to make the desert bloom, became a reality through many innovative developments. At the Weizmann Institute of Science (est. 1934), we will explore the vision of Chaim Weizmann, (Israel’s first president and also a biochemist) that is so relevant 80 years later, and expressed in the following quote:

“I trust and feel sure in my heart that science will bring to this land both peace and a renewal of its youth, creating here the springs of a new spiritual and material life. [...] I speak of both science for its own sake and science as a means to an end.”

We will visit centers in less privileged areas, centers that empower families and teach them how to invest in their children and help them grow to their full potential. We will see the children exploring science at the new early learning center that focuses on STEM education which is designed to prepare them to our digital world and world of innovation and creativity. For a full itinerary see the Itinerary page.

In addition, this educational seminar is designed to inspire and equip educators working with children in preschools, day schools, supplementary schools, and other educational settings. The itinerary includes a variety of topics woven together to address today’s needs.

We are very thankful for Boston’s Combined Jewish Philanthropies (CJP) and in particular the Boston-Haifa Connection for their vision and support connecting educators, professionals, students and families to the land of Israel, its people and its history.

This program is led by Rachel Raz, Director of the Early Childhood Institute of Hebrew College

And is Generously Funded by Combined Jewish Philanthropies 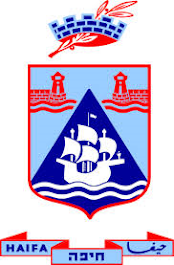 In partnership with our Haifa Early Childhood Education Partners

And in collaboration with Keshet travel agency